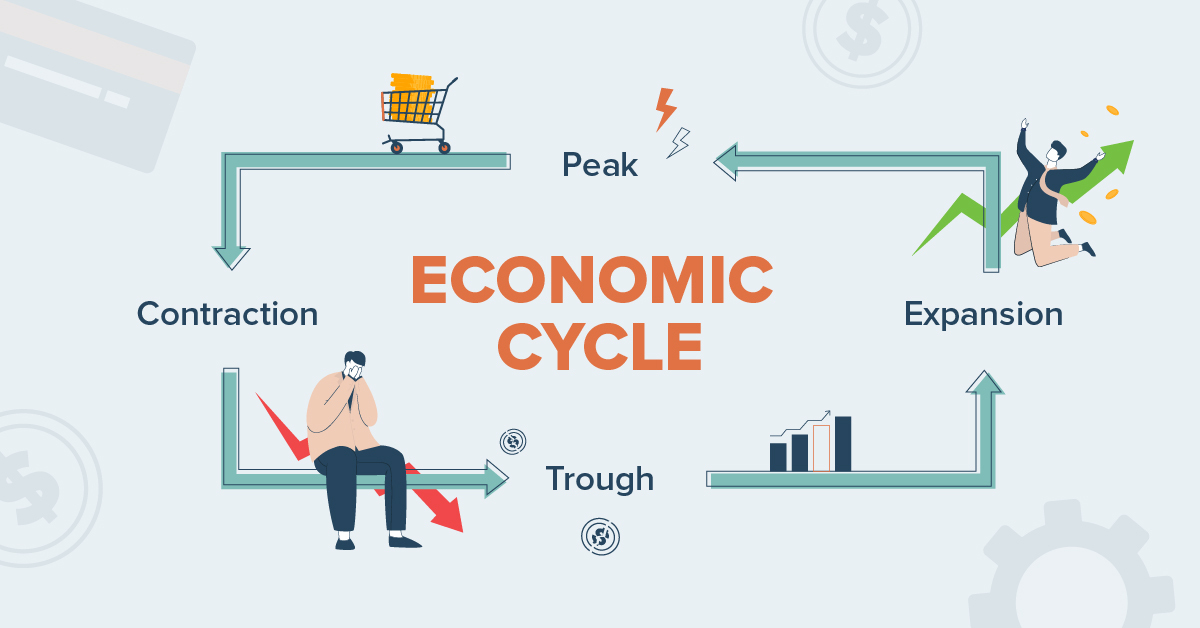 The economy works like a single machine. History has demonstrated that both the financial market and real economics move in cycles through various points in time. It has a fixed cycle, and according to the Federal Reserve of St. Louis, the average length of the entire business cycle has been roughly 6 years, comprising 5 years for the average expansion and roughly 1 year for the average contraction.

Economy is made up of a lot of simple transactions like buying clothes in the mall domestically to international transactions like Apple sourcing cameras from Sony. Every transaction involves consumers and producers. As one’s spending is another’s income, transaction plays a prominent role in moving the economy and its growth. Productivity, innovation and hard work are the basic aspects that can drive the economy upward. The classic example of innovation is the development of steam engine technology in the 18 century. This technology has enabled mass production and revolutionised transportation. Therefore, the economic growth and these aspects are always deeply interrelated. Simply put, innovation can lead up to higher productivity, meaning that the same input generates a greater output. As productivity rises, more goods and services are produced – the economy grows.

Generally speaking, the economic cycle can be divided into 4 phases and each phase has different characteristics that can move and slow down the economy.

The beginning of the expansion tends to start from a healthy gross domestic product and coincide with increasing investor optimism that the economy is growing as productivity rises. The market sentiment is getting better and people are getting far more willing to spend, hence the increase of transactions. Businesses and markets expand while demand for goods and services increase exponentially.

The economy is booming, with low interest rates and a bullish market. The low interest rates make it easy for consumers to loan money from banks and make big purchases like buying houses and cars. As more transactions are made, productivity and people’s income and investment rise. Consequently the economy has hit its maximum rate and overheats, creating some latent imbalances in the economy such as inflation and asset bubbles.

However, just like the old adage goes, too much water drowned the miller. The peak of the cycle also caused the rate of inflation to rise proportionally. Prices of goods are marked up and the value of currencies depreciates as too much capital is flowing in the market. Eventually causing the prices of the goods to stagnate, business sentiment turns gloomy and employment falls. As a result, the central banks raise interest rates for the sake of reducing borrowing and excessive spending.

To understand it better, the current Covid-19 pandemic has halted production by forcing people to stay at home, indirectly affecting people’s spending and transactions. This is why governments and central banks come out with various fiscal and monetary policies to stimulate the economy and build market confidence to prevent the economy from contracting and enter the trough phase all too sudden.

As the market crests and starts to decline, we tend to see low confidence and increasing pessimism on the market, followed by a sell-off. One of the first signs we will see is the decline in stock prices, typically precedes a recession. Layoffs often make headlines and companies close it’s hiring until the recession is over. The economic growth and activities slowed down and stagnated and the economy hits bottom. This phase indicates the end of an economic cycle and yet the start of another expansion phase.

The 2008 Global Financial Crisis is one of the most significant incidents that have demonstrated the economic cycle perfectly. It began with the housing market bubble that was created by an overwhelming load of mortgage-backed securities during the peak phase when the economy was booming and interest rates were low. When the economy enters a contraction phase, reckless lending has led to unprecedented numbers of loans in default, causing many financial institutions to fail and require a government bailout.

As a result, the housing market was deeply impacted by the crisis. The ripple effect has caused the stock market to plummet and major businesses worldwide began to fail. Resulting in widespread layoffs and extended periods of unemployment worldwide – trough phase. But after a series of monetary policies and injecting capital into the market, the economy eventually enters the expansion phase with productivity starts to climb and businesses begin to expand.

Economic cycles are a major focus of economic research and policy, but the exact causes of a cycle are highly debated among the different schools of economies. Even so, there are various pivot indicators such as interest rates, gross domestic product, and the unemployment rate for market watchers to keep track of the phase we are currently in. As globalization has brought an unprecedented connection to the economy, every sector and industry are now ensnared within numerous all-encompassing spider webs, even the tiniest jiggle can bring economic impact to faraway destinations.

Most importantly, understanding the basics of how cycles work can avoid you from making emotional investment decisions that can permanently impair your portfolio. As we know that the expansion phase will come to an end at some point, but it’s hard to know exactly when. Therefore we study and analyze the history to better understand some of the patterns that occur leading up to a recession. Above all, we encourage investors and traders to take trading as a long term investment, don’t get too anxious when the market is experiencing a downfall as we know an expansion will eventually arrive.