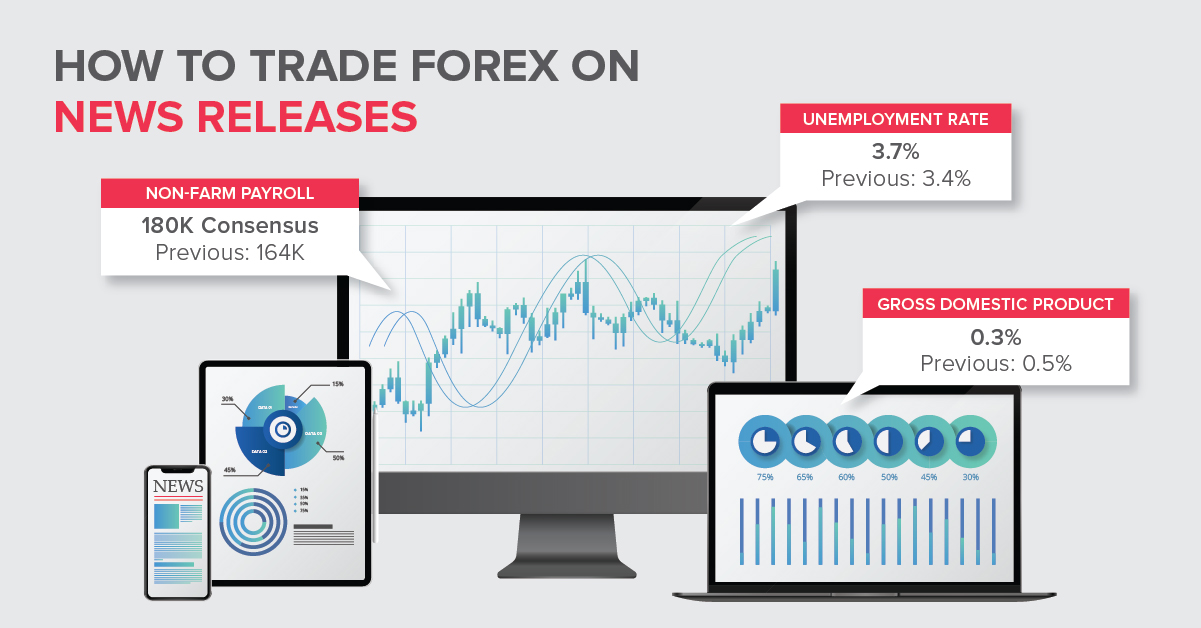 News, often plays a major role in influencing a lot of things. World peace, the economy, the emotion and stability of a country rely on news heavily. Therefore it is not an exaggeration to say that world peace can be at risk with just a brief statement release or even a single tweet from someone powerful, and so does the economy.

Trading Forex does seem a lot like trading the news. When the prospect is bright, the currency appreciates and when dark clouds loom, the currency depreciates. As simple as that. The only complicated part is how to differentiate the news and financial releases from the most to the least important accurately.

There are 8 major currencies – EUR, USD, JYP, GBP, CHF, AUD, CAD and NZD and 7 major currency pairs, where each pair is paired with the US dollar. And since the US dollar is on the “other side” of most of the currency trades, economic releases from the US tend to have the most significant impact on the Forex market.

Traders can easily find the expected news, for instance, interest rate decisions, retail sales and inflation rate on any financial website. The release dates are predictable and easy for traders to keep track of. These releases do not always bring a shock to the Forex market as the likelihood of a sharp move between the figures is low, but keeping an eye on these can help traders reap the rewards better when the timing is right.

As the name suggests, the unexpected financial news like when a country’s president dies or natural disasters often caught traders off guard. It can be man’s best friend or worst enemy as it is extremely dependent on the way traders handle it at the pivotal moment, usually in the 24 hours of the news are announced.

The main reason why news trading has become increasingly popular among Forex traders is because it brings opportunities to them within a short period of time. Even though the role that financial releases play is often changing, Gross Domestic Product (GDP), Unemployment Rate, Interest Rate Decisions, and the U.S. Nonfarm Payrolls (NFP) Data are often excluded. It is safe to say that they hold the strongest power in driving the currency market as they are the nation’s economic health report, one of the easiest ways for traders to have a quick view on the country’s economy.

The key considerations to keep in mind when it comes to trading the news is knowing when is the release date, which releases you should prioritize and how to trade based on this market-moving data. There are countless news releases on the market, to make it easy for you, try to focus on the currency’s country you are trading. If you mostly trade the greenback, bring your focus to the U.S. financial releases. You get more time to do your study and analyze better by doing so.

Days or weeks before the news report announced, financial analysts will often come out with some kind of forecast on the number that will be released. Even though not every analyst shares the same opinion and number, but in general the difference between the numbers is small and it is called consensus.

Forex trading on news releases starts before the news is even released, there tends to be a period of consolidation or trading trend before a big number. The consensus is not the official number, yet this number alone can affect the sentiment and mood of the market. Hence it is crucial for traders to keep track of the market consensus and the actual announced number.

To make sure you always keep on top of what the market is focusing at the moment, follow our Weekly Key Releases on TriumphFX Analysis.