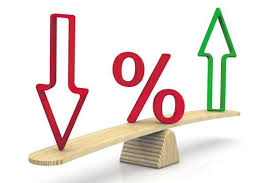 What are interest rates?

In layman terms, a central bank ensures that a countries economy is steady and growing at a sustainable pace. Interest rates are a key tool used by central banks to achieve this purpose – they can be used to stimulate growth, slow-down growth and also influence inflation.

Why are they important when trading Forex?

When interest rates are being cut, this generally means that an economy is slowing down or is under pressure, causing a currency to lose value. The purpose of cutting rates is to stimulate economic growth.

When interest rates are raised, this generally means that an economy is doing well, causing a currency to appreciate. The raise in rates helps ensure that the economy does not grow too quickly i.e growth that is unsustainable.

When interest rates are kept the same, this can indicate a stagnant or slow growing economy.

Australia
Current Rate: 1.50%
Forecast: No change
Detail: The Reserve Bank of Australia (RBA) continue to keep rates at the record low of 1.50%. The inflation rate continues to remain low and stable, providing no incentive to adjusting rates. Growth has slowed slightly but the economy is steady and performing well under the current rate and monetary policy.

Canada
Current Rate: 1.75%
Forecast: 2.00% by the end of 2019
Detail: The Bank of Canada (BOC) continues to increase rates at a steady pace. The current rate of 1.75% is a record high since December 2008. The Canadian economy is growing. Oil price fluctuations may impact future interest rate decisions.

Europe
Current Rate: 0.00%
Forecast: No change
Detail: The European Central Bank (ECB) have announced that interest rates will likely stay unchanged until the end of 2019. Poor economic data continues to be released from the Euro area. Brexit could weaken the European economy further.

New Zealand
Current Rate: 1.75%
Forecast: No change, possible cut to 1.50%
Detail: The Reserve Bank of New Zealand (RBNZ) continue to keep interest rates at the record low of 1.75%. New Zealand’s economy was steady and performing well until 2019, economic figures have since been negative, shedding doubt of any interest rate hikes. Rates could be cut to try and stimulate growth.

Switzerland
Current Rate: -0.75%
Forecast: No change
Detail: Rates continue to be at all-time lows. The Swiss economy was stagnant during 2018 but has seen some positive momentum so far in 2019.

United Kingdom (UK)
Current Rate: 0.75%
Forecast: No change, possible increase to 1.00%
Detail: The UK economy continues to perform well. Concerns over Brexit are the main factor in not hiking rates.

United States (US)
Current Rate: 2.50%
Forecast: No change
Detail: The US economy continues to perform well. Latest forecasts for economic growth has been revised down. No rate hikes are now expected until the end of 2019.